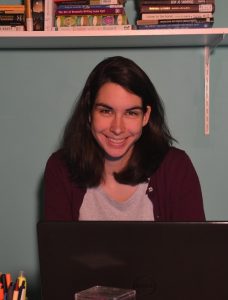 Catherine Buck, an alumna of the Rutgers-Camden MFA in Creative Writing Program (’18) has been hired as the new Program Director of Mighty Writers Camden. Mighty Writers, the Philadelphia-based organization focused on teaching young people to write with clarity, opened its Camden chapter, its first in New Jersey, in spring 2018 at the Nick Virgilio Writers House in the Waterfront South neighborhood.

“I’m thrilled to be working with Mighty Writers at such an exciting time in their expansion into Camden,” Buck says of her new role. “I’m especially looking forward to branching out and connecting with more schools, and tailoring our existing programs to best fit the needs and interests of our students.” Buck says her time at Rutgers set her up to succeed: while an MFA candidate, Buck worked with the Writers House to launch Growing Great Writers, an after-school creative writing program for Camden schools and community centers. She’s excited to continue to partner with Rutgers in the future, and a few RUC graduate and undergraduate volunteers have already found their way to Waterfront South.

Under Buck’s leadership, Mighty Writers Camden is off to a running start: this fall, site will offer twice as many hours of after-school programming as in the past, as well as weekend workshops and programs for toddlers.

Want to get involved? Email Catherine at cbuck@mightywriters.org